Under the patronage of Jean-Francois Trocard,

President of the Democratic Republic of Telluria

Telluria is the young country of the future located in the Altai mountains. The country has received its name from Tellurium52, a rare silver-white metalloid looking similar to tin, discovered in 1782 in Transylvania. Extremely rare, it was coincidentially found in the native form of elemental crystals until Chinese archeologists discovered an old Zoroaster sanctuary built on a Tellurium mine located in the Altai mountains, near the village Turochak. In the cave there were 48 skeletons with native Tellurium nails beaten into their skulls. Joint scientific research made by scholars from the Beijing Institute of Brain and the Stanford University brought unexpected results: a Tellurium-made wedge nailed into a specific area of the human skull shifts the person into an euphoria and complete loss of sense of time, Zeitgefühl.

In 2026, the UN has prohibited further experiments with Tellurium, wedges have been classified as illegal super strong drug. After the revolution in the Barabin province of Altai organized by the Legion des Frelons Bleus, a nationwide referendum has proclaimed the independence of Barabin from the rest of the Altai. The new state of the Democratic Republic of Telluria has been established on January 17, 2028. The Colonel Jean-Francois Trocard, chief of Les Frelons Bleus, has been elected president of DRT. The Democratic Republic of Telluria is now recognized by 24 countries of the world.

The  inhabitants of DRT are employed in cattle breeding and the export of Tellurium. But they are more famous for faith healing based on skull trepanation with the use of native Tellurium that helps cure brain cancer, schizophrenia, sclerosis disseminata, autism and Alzheimer. The Democratic Republic of Telluria is the unique country in the world where Tellurium wedges are not treated as illegal drugs. International sanctions were applied to the government of DRT but they were not successful. Some countries including Australia, Great Britain, Iran, California, Prussia, Bavaria, Normandy, Albania, Serbia, Wallachia, Halychyna, Moscovia, White Sea, the Ural Republic, Ryazan, Tartaria, Barabin, and the Baikal Republic have not yet established diplomatic relations with the Democratic Republic of Telluria. The citizens of these countries cannot enter the territory of DRT.

Founded in late 19th century, the Venice Biennale was conceived as the greatest international competition in fine arts. The participating countries built pavilions in the municipal gardens where they exhibited their best national achievements in the field of art. With the growing number of countries in the world, the number of participating countries augmented every year, and the pavilions spread first to the district of the Arsenale, and later to the numerous churches and palazzi over the entire city of Venice. New participants, including constituent elements of former empires and federations – USSR, Yugoslavia, etc. –inevitably lead to an increasing number of national pavilions. Almost the whole city is rented out during the summer to the national selection committees. Developing countries take their chance to enter the international cultural circuit.

The Pavilion of Telluria is a new location on the multinational map of Venice, created to show the best art of the Democratic Republic of Telluria. This year the pavilion presents two artists, Vladimir Sorokin, author of the intellectual bestseller Telluria, and the painter Genia Chef. In Sorokin’s novel, Tellurian carpenters travel around a post-war Europe populated by zoomorphic beings, genetically manipulated creatures half-human half-animal and beat Tellurian nails into the heads of new Europeans; Islamistic regimes fight against new crusaders; in Moscow, separated by a wall, the need for gasoline is replaced by potatofueled motors.

For the Venetian project the artists shift their roles: Sorokin appears at this show in the role of a visual artist, while Chef comes out mostly as a story teller and narrator. Sorokin presents his oil paintings dealing with Tellurian subjects, Chef displays his calligraphic Tellurian diaries. The exhibition is dedicated to the history and the future of the Democratic Republic of Telluria. 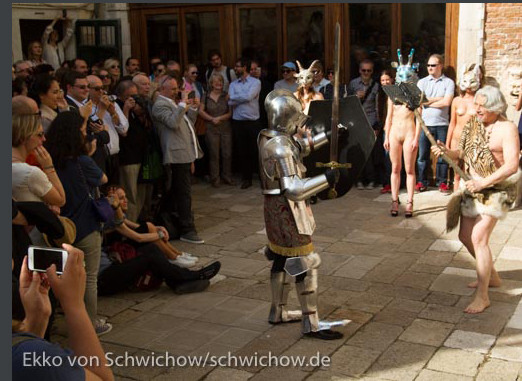 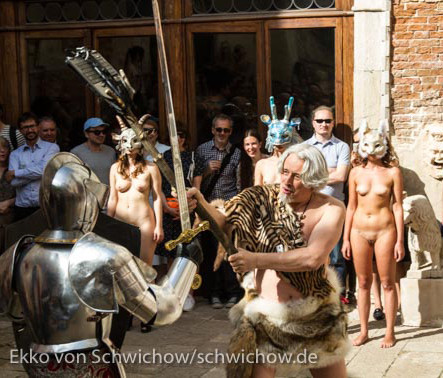 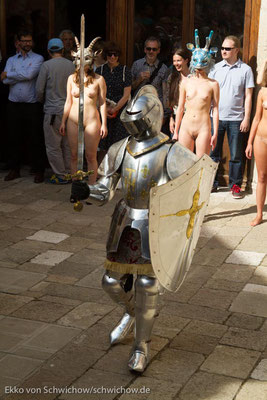 Performance of the artists Genia Chef and Vladimir Sorokin at the opening of Pavilion Telluria in Venice on May 7, 2015

"Participants of the performance were zoomorph creatures - naked girls with animal heads and the artists. Genia Chef, wearing a knight`s armour and shouting "Deo Gloria!" ("For the Glory of God") and "Civis pacem, para bellum" ("If you want peace, prepare for war!") was fighting against Vladimir Sorokin, wearing an animal fur. Sorokin`s weapon was a notebook, attached to a wooden stick, and he was shouting words from his novel "Telluria". The battle ended with the defeat of the knight, who fell down from a stroke of the notebook on his helmet. His last words were "Per aspera ad astra!" ("Through hardship to the stars!"). Shortly after, also Sorokin fell down. The girls slowly approached the fallen combatants and drove into their heads nails from tellurium. After that the two warriors got up and the girls led them into the Palace."

Dimitri Ozerkov, curator of the project

Report about the exhibition "Pavilion Telluria", in the arts program of Deutsche Welle tv, the German international tv broadcaster.